Shravanabelagola got the name “the white pond of the Sravana” or “the Jain monk” is named with reference to the colossal Jain image of the place.

The prefix Shravana also serves to distinguish it from other Belagolas with the prefixes Hale and Kodi. The word belagola came from two kannada word Bel means white and kola means pond inspired by the beautiful pond in the middle of the town. The Sanskrit equivalents Sveta-sarovara, Dhavala sarovara and Dhavala-saras used in the inscriptions that support the derivation of this word from the two Kannada words.

Some inscriptions mention the name of the place as Belgula (or also Belugula and Belagula) which have given rise to another derivation from the plant called white gulla (Solanum ferox). This derivation is in allusion to a tradition which says that a pious old woman completely anointed the colossal image with the milk brought by her in a gullakayi or gulla fruit. The place is also designated as Devara Belagola (Belgola of the God) and Gommatapura (the city of Gommata, the name of the colossus) in some epigraphs. Further, the epithet Dakshinakasi or southern Kasi is applied to it in some modern records.

Be the first to review “Mysore to Shravanabelagola” Cancel reply 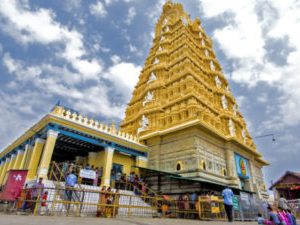